Unfortunately, some professing Christians refer to themselves by this self-deprecating term. 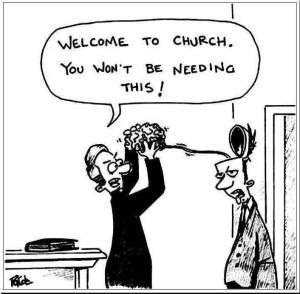 The “dumb sheep” label doesn’t come from Scripture. It comes from the spiritually-abusive Shepherding Movement of the 1970’s.

The Shepherding Movement (also known as the Discipling Movement) was the failed attempt of religious leaders to promote accountability, submission to authority, and covenant relationships through “personal pastors” who acted as “spiritual coverings.” The goal of the Shepherding movement was to develop mature character and prevent moral failures by making every believer “accountable” to a “pastor” who personally mentored them.

Unsurprisingly, the Shepherding Movement became plagued by controlling religious leaders with a superiority-complex. These religious leaders saw themselves as “the wise shepherds” and their followers as “lowly laymen” who didn’t know their right foot from their left.

Professing Christians were taught that “God calls His people sheep because sheep are dumb. They aren’t the brightest creatures. They’re stupid, rebellious, hardheaded, and defenseless.” As if to imply that God’s people are brainless animals who “need to be corralled by a man of God who knows what’s best for them and can save them from their foolish ways.”

Although the Shepherding Movement was dismantled decades ago, its abusive and demeaning false teachings (including the dumb sheep concept) are alive and well. Some professing Christians continue to put themselves down in an attempt to seem humble (“Oh I’m just a dumb sheep dependent on the Lord!”), and some religious leaders continue to belittle and control their congregants by diminishing their spiritual identity in Christ.

The Shepherd and His Sheep

The Lord used the metaphor of a Shepherd and His sheep to illustrate His protective nature, guidance, provision, tender care, oversight, and sacrificial love for us. The Lord calls us “sheep” as a term of endearment, not to imply that we are stupid, idiots, aloof, or simpletons.

The term “dumb” is used in Scripture, however, the ancient Hebrew and Greek terms translated as “dumb” do not mean stupid, dull-witted, unintelligent, or foolish.

The ancient Hebrew and Greek terms translated as “dumb” have a few meanings:

1. To lack the ability to speak (due to a physical disability or demon-possession). For example, in Matthew 9:32-33, Jesus cast a demon out of a man who was deaf and dumb (mute, unable to speak).

3. To hold one’s peace by remaining silent. For example, Isaiah 53:7 says that Jesus “. . . was oppressed and treated harshly, yet he never said a word. He was led like a lamb to the slaughter. And as a sheep is dumb [silent] before the shearers, he did not open his mouth.”

Nowhere in Scripture does the word “dumb” mean to be stupid, dull-witted, unintelligent, or foolish.

How does God View His Sheep?

The Good Shepherd said: “But the one who enters through the gate is the shepherd of the sheep. The gatekeeper opens the gate for him, and the sheep recognize his voice and come to him. He calls his own sheep by name and leads them out. After he has gathered his own flock, he walks ahead of them, and they follow him because they know his voice. They won’t follow a stranger; they will run from him because they don’t know his voice.” (John 10:2-5)

Jesus has a complimentary view of His sheep. He said that we recognize His voice and come to Him, and that we follow Him because we know His voice. But we will not follow strangers, we run away from them. Does that sound like an unintelligent undiscerning person to you? Is that the behavior of someone who is stupid and foolish? Not at all. Following Jesus and avoiding false shepherds is spiritually-smart and wise. Let’s keep reading. . .

“All who came before me were thieves and robbers. But the true sheep did not listen to them.” (John 10:8)

Refusing to listen to wolves and hirelings shows good judgment and wisdom, not naivete and idiocy (a lack of sound judgment).

“Look, I am sending you out as sheep among wolves. So be as wise as serpents and as harmless as doves.” (Matthew 10:16)

How Did The Apostles View God’s Sheep?

“And concerning you, my brethren, I myself also am convinced that you yourselves are full of goodness, filled with all knowledge and able also to admonish one another.” (Romans 15:14).

Paul didn’t view the saints as incompetent stumbling bumbling dumb sheep. He believed that they were knowledgeable enough to warn each other about the very things he wrote about.

Can “dumb sheep” be wise in what is good? No.

“I always thank my God for you and for the gracious gifts he has given you, now that you belong to Christ Jesus. Through him, God has enriched your assembly in every way—with all of your eloquent words and all of your knowledge.” (1 Corinthians 1:4-5)

Paul saw the saints as gifted and knowledgeable. He didn’t view them as spiritually or intellectually incompetent or inadequate. He expected them to be spiritually-competent enough to exercise their spiritual gifts in decency and order (1 Corinthians 12, Romans 12:6-8).

Believers are expected to be spiritually-smart and mature in understanding, not “dumb sheep.” This is why the saints were sometimes reproved for being carnal and stunted in their spiritual growth (1 Corinthians 3:1-3). The apostles had high expectations for them.

“He has showered his kindness on us, along with all wisdom and understanding.”(Ephesians 1:8)

“Therefore be careful how you walk, not as unwise men but as wise, making the most of your time, because the days are evil. So then do not be foolish, but understand what the will of the Lord is.” (Ephesians 5:15-17)

It doesn’t sound like John the apostle saw the saints as dumb sheep either. He saw them as anointed, discerning, and knowledgeable in the truth. He didn’t write to them because he saw them as defenseless, helpless, aloof sheep. According to John, they didn’t even need anyone to teach them the difference between truth and counterfeit, because the anointing [who is the Holy Spirit] already taught them the truth. John wrote them to confirm the truth of the Holy Spirit.

The cliché about “sticks and stones” isn’t true. Words are harmful, and they can have a deep negative impact on us, especially when coupled with the subversive influence of Scripture-twisting.

In a world full of put-downs, insults, verbal abuse, and demeaning language – especially towards believers, the last thing we need is to be called “dumb sheep” by those who ought to model the grace, loving-kindness, and tender care of the Chief Shepherd.

Frankly, if some religious leaders think that their congregants are stupid and dim-witted, that might be a reflection of their poor leadership and watered down theology.

Although there is a dumbing-down taking place in churchianity today, I don’t believe that God’s people are “dumb sheep.” No. . . we aren’t dumb at all. Like the Jews at Berea, we are “more noble” than that.

“And the people of Berea were more noble than those in Thessalonica, and they listened eagerly to Paul’s message. They searched the Scriptures day after day to see if Paul and Silas were teaching the truth.” (Acts 17:11)

One thought on “Are You A “Dumb Sheep”?”