Is this Scripture saying that we aren’t allowed to question leaders and hold them accountable to God’s word, and that if we do, we’re “touching God’s anointed” and something bad will happen to us?

A study of 1 Chronicles shows that “Touch not mine anointed, and do My prophets no harm” is part of a song of thanksgiving that king David wrote after Israel won a war against the Philistines. Their victory inspired David to reflect on the many times that God protected Israel from being destroyed by their enemies.

The Hebrew word that David used for “touch” means to physically strike someone. He was warning anyone who would dare inflict physical violence against Israel and God’s prophets. He was not saying that we are not allowed to question religious leaders and hold them accountable to God’s word.

The widespread attitude that no one is allowed to question, correct, or expose religious leaders is false, idolatrous, dangerous, and contrary to Jesus Christ. All throughout Scripture, God sent Believers (such as Moses, Nathan, Ezekiel, Jeremiah, Elijah, Elisha, etc) to question, rebuke, and expose wicked shepherds in Israel.

The Lord expects us to hold one another accountable and protect each other from spiritual harm by questioning, correcting, and (if need be) exposing religious leaders. We do this out of love for God, His word, and His people. 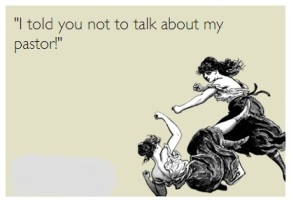 The belief that religious leaders are somehow exempt from accountability mainly stems from idolatry (the worship of men), Biblical illiteracy, an inflated view of leadership, and faulty concepts of accountability.

The truth is that no one — no matter one’s title, position, or status — is above being questioned, corrected, and exposed if need be. Everyone is capable of falling into sin and error, therefore everyone is subject to being questioned and held accountable.

In Matthew 24:4-5, Jesus warned us that many false prophets would come in His name saying “I am the Christ” (which literally means “I am the anointed one”) and lead many people astray.

This prophecy is being fulfilled today. Many false shepherds have come in Jesus’ name claiming to be “God’s anointed” when in fact, their fruit speaks to the contrary.

The only leaders who don’t want you to question them and hold them accountable are wolves in sheep’s clothing. They’re afraid of being exposed and losing followers, because their followers provide them with wealth, power, and a platform to influence the public.

Beware of leaders who become defensive and angry when questioned and reproved. A hostile response is a sign of guilt.

And who is “God’s anointed” anyway? Just because someone has a title, wealth, a large following, and performs signs and wonders doesn’t mean they’re anointed. False prophets have all of the above, but they aren’t anointed (Exodus 8:7; Matthew 24:24; 2 Thessalonians 2:9; Revelations 13:11-15).

The evidence of the anointing is the fruit of the Spirit, which is godly character (Galatians 5:22-23). But if someone consistently produces bad fruit (the works of the flesh listed in Galatians 5:19-21), there is no reason to believe that person is anointed or of God (1 John 3:4-10). A good tree cannot bear bad fruit.

The greatest example of what it means to be anointed is Jesus Christ.

The term Christ/Messiah actually means “The Anointed One.”

Jesus alone has the anointing or Holy Spirit without measure (John 3:34; Colossians 2:9; Hebrews 1:9). He is more anointed than anyone else by virtue of His Divinity. Yet He didn’t walk around bullying people with “Touch not God’s anointed!” and brag about how anointed He is.

Serving others in humility is the mind of Christ. But where is this humility among prideful leaders who flaunt their fake titles, positions, and “special anointings” that they don’t possess?

Such leaders have a spirit of rebellion, which is witchcraft. And they misuse and abuse the Scriptures to bewitch unsuspecting congregants who admire them.

Religious leaders do not have a “special anointing” that places them on a higher level than others, or grants them immunity from being questioned, corrected, and exposed. All Believers stand on equal-footing before the Cross of Christ and share in the same anointing or Holy Spirit.

In the kingdoms of men, leaders of high stature are not subject to ordinary citizens, and they create loopholes to evade the law. But in the Kingdom of God, we are all mutually accountable to one another and God’s word. There are no big “i’s” and little “you’s” in the body of Christ. A leader who power-postures and acts as if he is not one of the sheep is a wolf.

Saints, don’t let anyone attempt to threaten you and muzzle your mouth with twisted spooky misinterpretations of the Scriptures.

Empty threats of “God punishing you” for speaking truth about corrupt leaders are nothing but vain curses that shall not alight. No weapon formed against you shall prosper.

There is no need to walk on eggshells and be afraid to question leaders and call out those who are false. God has not given us a spirit of fear, but a spirit of love, power, and a sound mind. The righteous are as bold as a lion, not cowardly lions.

In this age of apostasy, we must have a spiritual backbone to speak the truth in love, in season and out of season, whether anyone wants to hear it or not (2 Timothy 4:2-5).